AGRU
This year, AGRU celebrates a very special anniversary: 70 years ago, back in 1948, Alois Gruber senior laid the foundations for a success story which has continued to the present day. But the path from a one-man business to an international corporate group has been a long one. 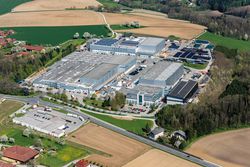 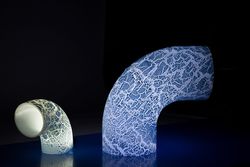 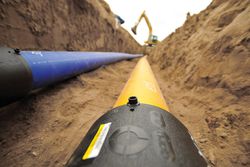 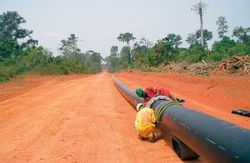 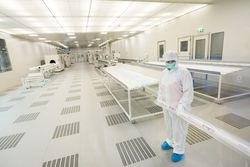 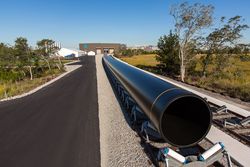 Seventy years on, AGRU has become a genuine global player with an annual turnover of € 350 million. The AGRU Group has plants on three continents and employs more than a thousand staff worldwide. Given that exports currently account for 95% of its business, there are AGRU customers all over the globe. Within the industry, AGRU is synonymous with premium quality, customer focus, reliability and professionalism in all areas of plastics engineering. From smartphones to laptops and TV screens, a high number of digital devices are now manufactured using AGRU products. Global groups such as SAMSUNG and LG rely on the ultra-pure PURAD piping system made in Bad Hall for their semiconductor production. In the United States, the hidden champion produces large-scale polyethylene pipes with diameters of up to 3.5 m and lengths of up to 600 m. These large pipe strings, weighing up to 1,000 metric tonnes, are then shipped across the world's oceans to their deployment locations. One major driver of success in the development of an industrial empire spanning several continents was extensive application engineering expertise, combined with a comprehensive premium plastics engineering portfolio.

AGRU and the economic miracle

Alois Gruber senior was a tireless entrepreneur and one of the most remarkable personalities of the Austrian economy post-1945. As early as 1948, the master locksmith founded his own workshop in Waldneukirchen. In the 1950s, he embarked on pioneering work in two industries - initially in anodising technology, and later in the manufacturing of plastic piping systems. When he purchased an anodising system in 1954, he laid the foundations for today's success at AGRU Oberflächentechnik GmbH. The creative sales genius bought the first machine for extruding plastic pipes in 1961. Five years later, Alois Gruber invested in injection moulding machines for fittings. AGRU Kunststofftechnik GmbH became the first manufacturer in Europe to deliver pipes and fittings from a single manufacturing source. In the post-war years (the period of the 'economic miracle'), AGRU thus made its own history.

AGRU has always been ahead of its time, thanks to continuous innovation. By 1974, the company was exporting to more than 20 countries, and launched its first computer in the same year. Alois Gruber recognised that the PC market, which was still in its infancy, had huge future potential. Ultra-pure water pipes were essential to computer chip production, and in 1976 AGRU started manufacturing these with great success under clean room conditions from the ultra-pure, semi-crystalline fluoroplastic PVDF.

After investing in the calendering of geomembranes with a width of up to 5 m for environmental protection purposes in 1986, the brilliant businessman invested in his own factory on the east coast of the USA in 1988. With geomembranes alone, this factory now generates a similar turnover to the parent company in Bad Hall which covers all product groups.

In the following years, Alois Gruber senior gained support from his own family when his son, Alois Gruber, joined the company as a managing director. He transformed the AGRU Group into a global player, opened new production facilities in China and India and successfully established AGRU's position as a single-source supplier. Thanks to ongoing investment in new technologies, AGRU is a 'first mover' that delivers industry innovations such as large diameter pipes, electrofusion fittings, high purity piping systems and extra-wide geomembranes from the outset of the respective industrial cycle. Electro-socket fittings, proven in millions of applications, were launched in 1990. This revolutionary invention facilitates the installation of plastic piping systems, for which time-consuming butt or socket welding had been needed up to this point.

To carry on meeting the increased demand for AGRU products in the USA, a new plant was built in Nevada, in the west of the USA, in 2008. Fully-automated high-bay warehouses in Austria and the USA simplified logistics. In 2010, AGRU began the production of large-scale polyethylene pipes with diameters between 80 cm and 250 cm. One highlight of the past two years has been the investment in a high purity production system for the PURAD high purity piping system at the Bad Hall site in 2016. International customers, such as SAMSUNG and LG, deploy the AGRU high purity piping system to generate sensitive semiconductor circuits. Another highlight was the inauguration of AGRU's own large diameter pipe plant at Charleston in the USA to enable the extrusion of what is currently the world's largest HDPE pipe with a diameter of 3.5 m and a length of 600 m, a new milestone. Today, AGRU is represented locally by sales partners in more than 100 countries. Moreover, the AGRU Group will continue to expand its market share and explore new markets in the years to come. These successful internationalisation efforts will not only reinforce the global player's position on the international markets, but also lay a secure foundation for future growth.

Piping systems that reduce your TCO

The total cost of ownership (TCO) of a piping system depends on several factors such as material, design of...

Under the motto "Regionality matters" of the initiative Steyrland, AGRU Kunststofftechnik GmbH awarded contracts around four new warehouse lifts to...