AGRU
Between 16th and 22nd April, AGRU HDPE large-diameter pipes were loaded into the port of Charleston, where our new XXL PIPE PRODUCTION FACILITY is located. The Gruber family personally convinced themselves of this logistical excellence, which was professionally accredited and realized by the forwarding companies ACS Logistics and CV International. 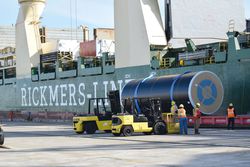 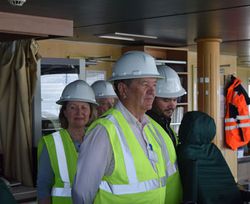 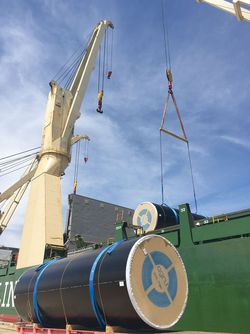 The HDPE pipes which where manufactured in the new XXL PIPE PRODUCTION FACILITY, were loaded onto a cargo ship, and later shipped torwards to Singapore. Since the Gruber family visits the American production plants twice a year and just happened to be in the US, they were invited by the freight forwarders to take part at the loading of the pipes. Already the ship inspection was very impressive. Also the sensitive handling of our XXL pipes by the crane operator was worth seeing. Our pipes were precisely stacked in the large and deep hold oft he ship. The Romanian captain and his port captain were very courteous and told the visitors all the details about the ship. It was also interesting that the steering wheel of such a gigantic ship is smaller than that of a car.

Piping systems that reduce your TCO

The total cost of ownership (TCO) of a piping system depends on several factors such as material, design of...

Under the motto "Regionality matters" of the initiative Steyrland, AGRU Kunststofftechnik GmbH awarded contracts around four new warehouse lifts to...